A sharing on the Birth, and Life

of a Honey Bee Colony at Grass Lake Sanctuary, grasslakesanctuary.org

Today I took a modified version of Spikenard Farm's Bee Tea with me to the sanctuary.  It was modified in that I only used chamomile and nettle leaf in the tea since those are what I had on hand.  There are several other herbs recommended on the Spikenard website - which is a beautiful site  to visit and one of my top references: http://spikenardfarm.org/beekeeping_tips.html

Anyway, I wasn't sure if it would be warm enough to go into the hive, or even if they would like the mixture I had made.  My car was parked up at the care taker's house - a few hundred yards maybe from the hive.  The passenger side door was opened and I was standing outside the car talking with Marnie, another volunteer.  I looked over and there was a honey bee rummaging around in the open bag I had on the floor which contained the Bee Tea! "She found it - all the way up here! I exclaimed."  It was so cute!  I poured some of the tea in the lid of the jar so she could drink from it - which she did.  Well, I guess that answered my questions... and off I went to put the jar in the hive. 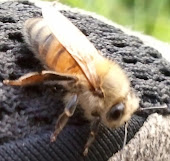 The content for this blog began forming in June of 2011.

It wasn't until September that I was able to catch up and start entering posts from the past four months. If this is your first time visiting, I suggest going back and reading the story from the start under September and October 2011 Blog Archives. At the very least check out the "Build it and They Will Come" entry to see the beautiful birthing of this colony!
If you enjoy this site, please consider supporting the bees at Grass Lake Sanctuary by making a donation, in any amount. Visit http://grasslakesanctuary.org and click on the Donate button. Thank you !
Sign up to receive email notices when new entries are posted,
and feel free to post questions or comments.

From here on - postings will be in real time - as the relationship with the bees, and their story, continues

Thank you again for your interest, and I hope you enjoy
what you
Read,
See,
Hear and
Feel !

The Daily Bee
Ann Arbor, Michigan
Hi, My name is Molly. I've had an interest in bees and beekeeping for several years. It wasn't until 2011 though that that interest manifested in actually "doing it". I first learned about a more natural style beekeeping through books and a site called "The Ringing Cedars Series" The information shared about bees, although brief in the first book, felt easy to me. It felt intuitively "right" - a natural way to flow. I felt inspired. My experience so far is that the bees have so much to share in seemingly simple, yet profound ways – It is this – the expansive wisdom of the honey bee, combined with human Relationship that I hope to learn from and share through this blog 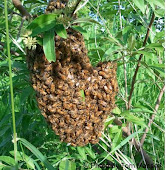